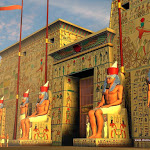 Because there is no thorough record of the deep studies conducted by the Egyptian priests on the complexity of human nature and disease, one can recognise many signs of the daily practice of therapeutic science by visiting the temples, including Karnak and Luxor, of this great civilisation. The temples were built in such a way that converged lines of energy were beneficial to those who entered. Each temple was built with a specific therapeutic intent, to balance the human body and reconnect it to its divine root.

The Egyptian Essene cures began in ancient times and experienced a period of great splendour and development under the dynasty of Amenophis III, father of Akhenaten. The discovery of subtle bodies and the currents of life favoured contact with therapists from Mesopotamia at that time.

The Essene community was the heir and custodian of this knowledge. It carried on, in a systematic way, work on the therapeutic use of light, sound, oils and ointments. The early Christians took up these practices handed down to them through the teachings of Jesus and his disciples and learned, especially from Mary Magdalene, the use of oils and consecrated ointments.

The physical body was considered, at that time, the final phase of a process of densification of various subtle bodies. The human, being made up of a physical body, soul and spirit, was thus considered a spiritual entity. It was believed that the state of health was the natural condition and the result of a harmonious flow of subtle energies in the body. The disharmony of this flow would instead lead to an imbalance and loss of communication between  various parts of the being, causing organ failure and subsequently disease in the long run.

At the end of the 1970s, Anne and Daniel Meurois Givaudan began to live decorporation phenomena, now commonly known as astral travel, in which consciousness rises out of the physical body. Some people can learn how to access it in a conscious way with a spatial-temporal perception that is profoundly different from normal.

Reliving some of his past existences, Daniel Meurois Givaudan has been able to return the cures practiced by the Egyptians during the reign of Akhenaten and those practiced by the Essenes at the time of Jesus.

Bernard Rouch, a direct cousin of Anne Givaudan, was 14 years old when he began to attend weekly meetings where he trained in aura reading and the practice of Egyptian Essene therapies, under the supervision of Anne and Daniel.

The decision of pursuing graduate study in a town located far from the place where this first group met, did not affect Bernard Rouch’s passion for these practices. He soon started to dedicate all his spare time to the practice of aura reading and the Egyptian Essene therapies, involving other people and forming new groups. He was able to experience what he learned in the original group, also deepening and adapting it to the ongoing challenges.